Dragomon: A Monstrously Fantastic Game That Will Rock Your World!

Dragomon is a 3D action RPG for PC that emphasizes quick combination attacks and evasion techniques.  There is a trainer element to the game as you are paired with a killer rabbit whose job class you can train and change. There is also a huge emphasis on collecting and breeding monsters as well as crafting and upgrading weapons.  This gives the game a Pokemon/Monster Hunter feel. 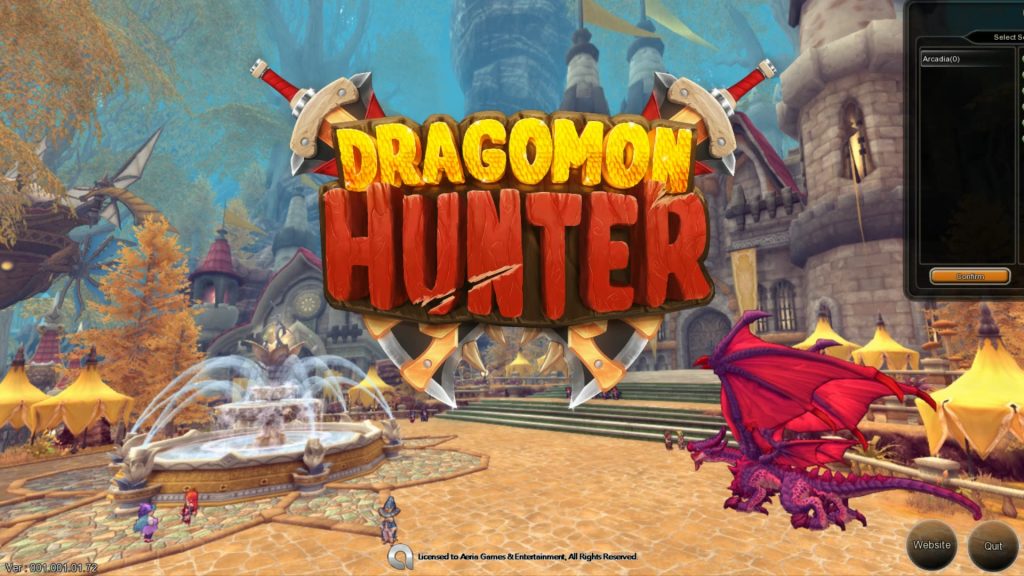 You get a variety of character choices and to customized and name your rabbit partner (Roger in my case) outlined in the video below:-

You can get a sense just how awesome this game is going to be from the over-sized weapons that are as big as the person holding them can’t you?

I went for the Scout.  The action with this character is quick and deadly, and you get a secondary weapon at level 20 which is a rifle.  I prefer blades as weapons because every time I try the gun I die.

Roger has the opportunity to learn additional jobs with the right items – these open up through the main quest and dialogue. 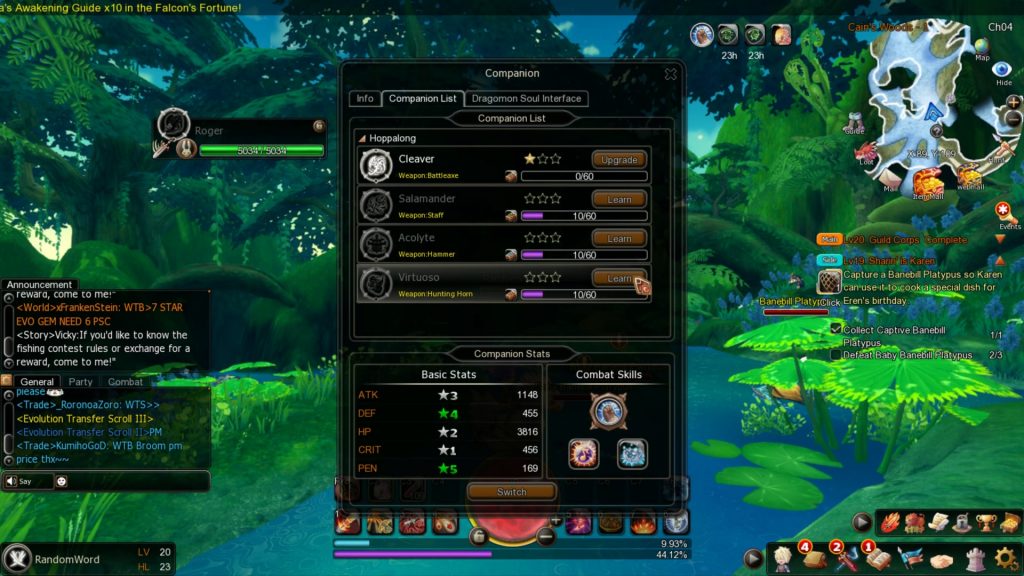 There are also titles, name prefixes and affiliation bonus that enhance your character’s status that can be earned through defeating enemies and completing tasks.

Here is a zoomed out view of the talent tree… 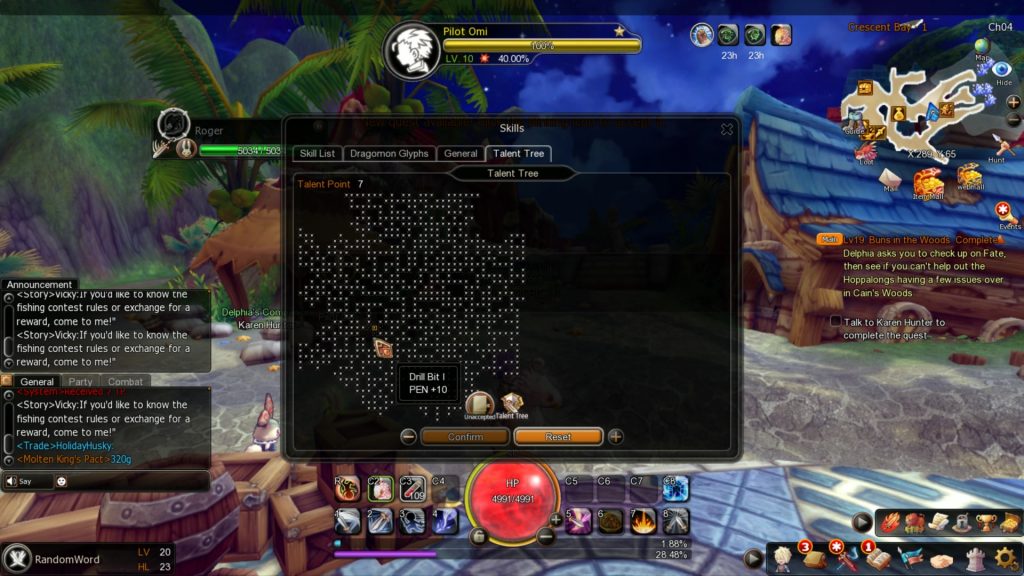 The basic story-line is that you’re a cadet straight out of the military’s training program and you’re doing tasks to get promote through the ranks.  There are hints of someone working against your organisation behind the scenes.

The story is very text heavy, it’s more like a light novel than a game as it describes your actions, and those of your bunny companion, through a lot of dialogue boxes.  You are introduced to a lot of re-occurring characters who are very unique too.  It can be a lot to take in and keep sorted out but the dialogue is well written and humorous in places. 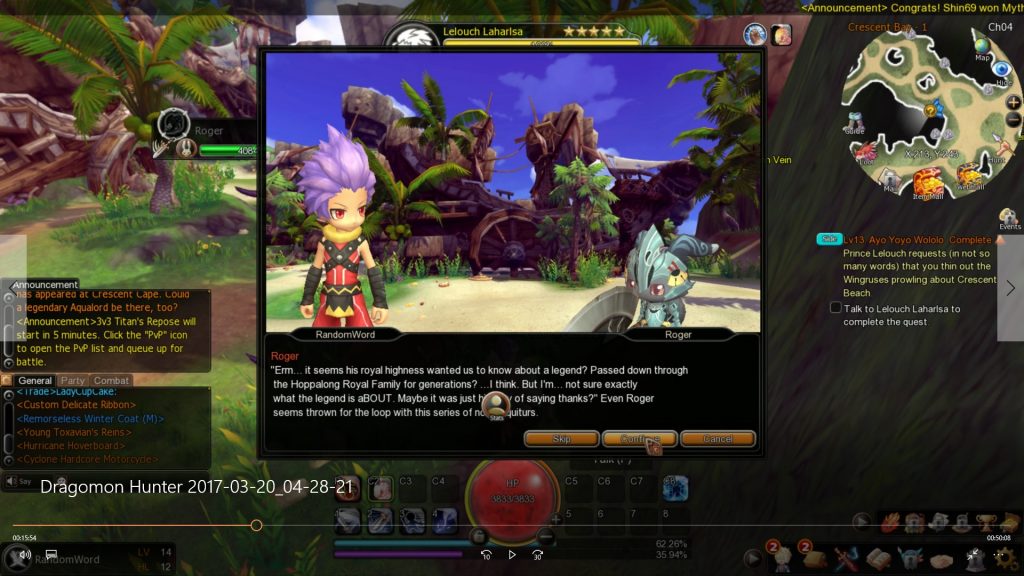 At one point in the story at least you have the opportunity to read fairy-tales which gives you a unique sense of the worlds history and values – but also beings these things into what I suspect is a greater plot.

Action wise the battle system is the best I have come across in a MMORPG so far.

The ability to roll in and out of combat to give bonus a quick hit and away from the danger area is amazing and makes it a really enjoyable system to experience.   The skills that you learn also augment this style of combat, learning dashing abilities that make you charge through enemies and their attack areas so you can attack their flanks for longer, for instance.

Here’s a quick look at the action:

And another, just ’cause it’s so awesome and I want to share:

This system shines best against the epic and gigantic monsters that are present on most maps.

A fact the game knows and takes into account allowing players to hunt and find these monster in a variety of ways: through solo (silver tickets) or party (golden tickets) battles at the arena which are won through quests, hunts of monster from the job board, or boss instance dungeons that appear along the main quest.

Here is a look at the boss type monsters:

A word of warning, be sure to look at the boss creatures you encounter on the field before charging – if you happen to encounter a party boss like this and your anything like me, you’ll die before you do even one percent of damage:

There is a jobs board that allows you to undertake daily tasks to gain material for crafting and earn influence with the factions in the game.  This influence determines the amount of quests that are available.

The importance of crafting and upgrading armor and weapon sets is something that is emphasized throughout the game and with each new ingredient you will earn a new recipe waiting to be made.  All equipment has a number of star levels, that represents the gear level.  The greater the level the more abilities are unlocked on the equipment. 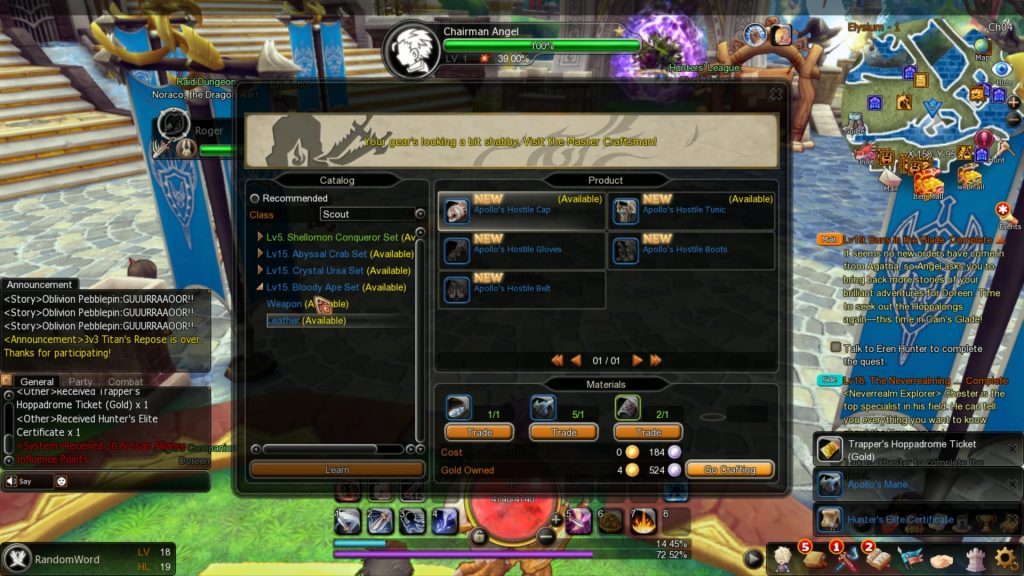 You also gain capture some of the monsters you battle or pick them up as eggs.

These monsters have a variety of uses such as steeds that both allow you to travel quick or unleash devastating attacks:

You can also send these monsters to your ranch where you can archive them for bonuses and rewards, put them out to pasture to level them up, or breed them by cooking and placing food out for them.

This ranch looks like it has additional content that I have not unlocked yet, such as a mine.  I am also told that ranch battles occur and can be epic depending on the creatures you’ve managed to breed and level.  I think the game boasts that it has over a hundred Dragomon for you to collect and raise.

The best thing about this ranch is it is shared across all your characters. 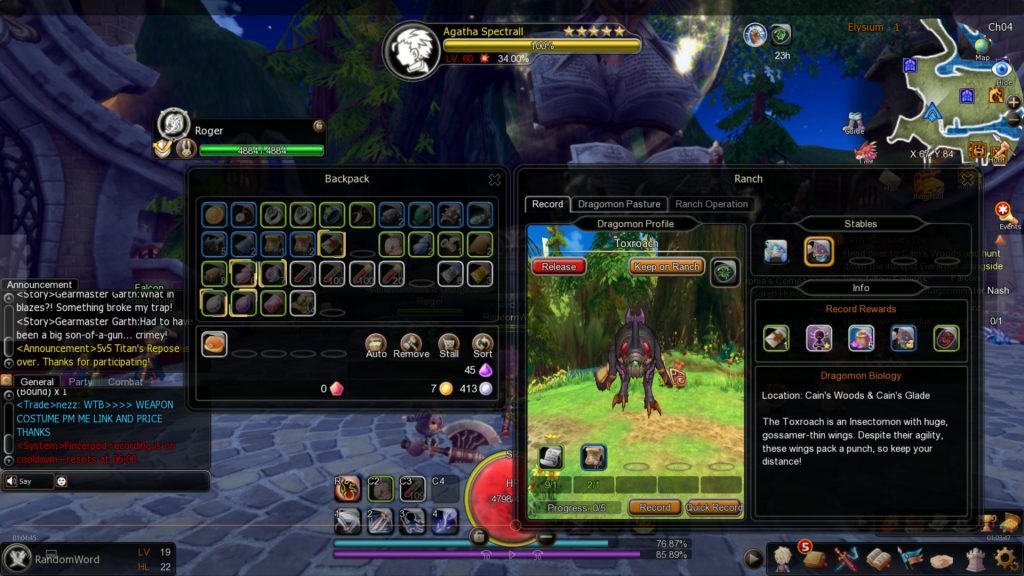 There are also additional things to do such as fishing, cooking, and collecting ore.

The only downside to the game-play is the camera angles can be a little tricky to manage on times, especially near a hill or the edge of the map where you can disappear or it zooms in random for no reason.

They also have jingle bells as the main town music which annoyed me.

The graphics are fantastic, and everything in the game is designed very nicely.

Your character and the enemies are fantastically drawn and their attacks are put together nicely.  The bosses are epic both on scale and detail which does make it feel like you are attacking monsters. 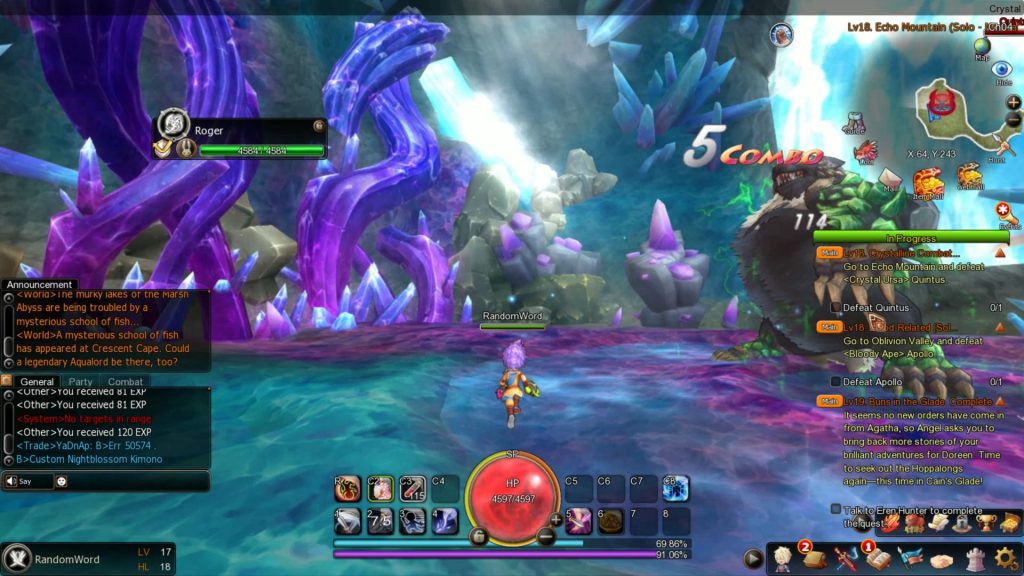 You gain costumes that allow you to change the look of you character and these can be stored at the bank in a shared vault so your other characters can also try them on.

A very active community that responds to questions and queries readily.

They were very active in recruiting to guilds and selling rare drops to people that might need to craft equipment.   The game does emphasis party tasks, such as party bosses that roam the map and the golden tickets you can win to challenge party bosses in the arena.  Parties had not become too necessary where I had progressed too, but I could see early on the benefit to forming one.

A game that is well worth playing as that action is simply fantastic.  It is a great game for those people that enjoy monster collection and breeding games too.  I highly recommend it.

User Rating: Be the first one!

Is Mass Effect : Andromeda Newbie friendly? A Review to Top the Rest

Related Articles
We will be happy to hear your thoughts 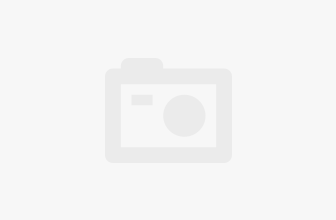 PlayStation’s ‘Big in Japan’ event had me drowning in collection of cheap anime games for ps4.   ...

Zombie-based tower defense games that are like Plants versus Zombies If you have jumped across ...

Funny tower defense games Like Plant Versus Zombies If you came to the extended list from the main ...

What are gamers up to 2017? – Gaming Industry Trends

The Most Common Gaming Stereotypes.

10 Best Cosplay That Will Make You Cry Tears Of Joy